The global burden of Tuberculosis 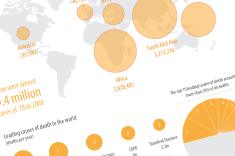 The British paper The Telegraph reveals that more than two billion people, or a third of the world's total population, are infected with mycobacterium tuberculosis, the bacteria which causes tuberculosis.

Tuberculosis is the world's seventh-leading cause of death. Last year, it killed 1.8 million people worldwide, the equivalent of a person every 20 seconds.

TB is contagious and spreads through the air. If it's not treated, each person with active TB infects an average of 10 to 15 people per year.

Of the countries who suffer with the disease, India is the one with the biggest burden, closely followed by China. But China is facing a significant uphill battle against drug-resistant forms of tuberculosis.

Drug-resistant TB, which is far more expensive to treat, emerges when patients fail to follow treatment regimens and take substandard drugs or stop treatment too early.

China has 4.5 million TB cases currently; and each year 1.4 million people fall ill with the disease. TB killed 160,000 people in China in 2008, according to the World Health Organization, Reuters reports.

It is not only a scourge in poor countries but also in the West, where it has flared anew in the last 20 years because of AIDS, which weakens the immune system.

TB is also a big drain on China's health budget because of a high incidence of people with a drug-resistant strain of the disease, which is a lot harder and more expensive to treat.

China spent US$225 million on tackling TB in 2008, up from US$98 million in 2002, according to WHO. These figures do not take into account what patients pay out of their pockets, typically between 47 and 62 percent of their hospital bills.

Popular posts from this blog

Top 15 Medical Specialties Of Pakistan You Should Know About

February 01, 2021
As we are already moving in the modern era of the third decade of the 21st century, mankind needs development and prosperity in every field of life. In the year 2020 we have realized that for the survival of humans, the most important field is the healthcare system. Those countries whose healthcare systems can withstand the pandemics are the ones who will survive in the future. No matter how much technology or nuclear weapons you have, if you want to fight till the end, you should have a stable and robust healthcare system to fight biological warfare. In Pakistan, like other countries, digitalization in healthcare systems is introduced. Pakistan produces highly qualified health professionals each year. And they are providing their services in Pakistan and other countries of the world. Pakistan still needs more hospitals and better infrastructure of the healthcare system to ensure the availability of healthcare facilities to every citizen. Digital healthcare platforms like Marham are
Read more